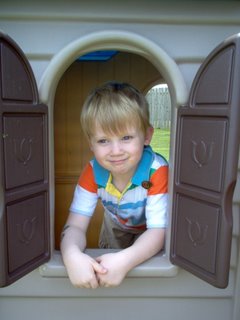 The moment parenting became truly scary for me was when Wylie was almost 3 years old. He had gotten in trouble for some small crime of childhood curiosity, and I had to punish him (probably by taking away a favorite toy,) which of course broke his heart and bruised his small ego. I remember sitting on the edge of his bed later that night, trying my best to explain to him why I did what I did, and that even though I was unhappy that he had disobeyed, I still loved him, and always would, no matter what. In his sweet little boy way, he smiled, and returned my hugs and kisses, patting my back in tenative reassurance. As I closed his door, my heart sank as I realized that as he lay awake in his bed, he was deciding whether or not he believed me. I wondered if he was thinking more about the fact that I had been unhappy, or about how much I loved him ( I would prefer the latter, not wanting to raise an anxious people-pleasing child.)
It was that moment when I realized that Wylie was developing the ability to internalize all my words and actions and form an opinion about them on his own. He was now his own person with his own thoughts, his own explanations & interpretations for the way the universe around him worked. He had his own personal world now – the world inside his head and his heart. And no matter how many questions I asked, or how well I observed him, I would never be able to know all that went on in that fast moving, independent brain and heart. My only job from now on was to do my best to guide and nurture, support and encourage, discipline and instruct, but it would be up to him to decide what he believed and what he didn’t. He would decide if he believed that I loved him as I said. Over time he would decide his own beliefs about God, and politics. He would decide if he thought our little family was cool or dorky, he would decide if he wanted to try harder or give up, be angry or forgiving, be open or shut down… I could do my best, but in the end, his own inner dialogue was going to continue to develop and I was unable to control it. Influence it? 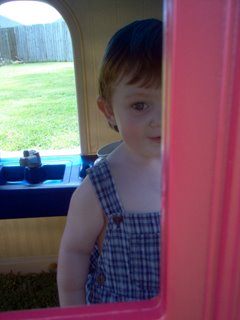 Yes. Control it? No.
So now Miles is approaching 2 and I know the day is coming when his thoughts will begin to gel more completely. When the world will be larger than Elmo, Hot Dogs and us. When his behavior will be guided more than just his natural reactions and copycating Wylie. When he will begin this process of becoming Himself, with thoughts and feelings known only to him. And again it is scary, and I will be on double duty to try and keep myself alert, looking for clues into why they do what they do, what they are thinking, why they are afraid, or scared, or excited or nervous. Trying to walk the fine line between protecting them from too much too soon and letting them go & grow, as they should, into their own persons, separate from me.
Because in the end, or rather really from the beginning, our children are not really our own and the best words I can think of to get through this ever changing landscape of parenthood are Help Me and Thank You.