The past few days I have been visiting my parents in Arkadelphia so that the boys can attend Vacation Bible School at my parents small Southern Baptist Church. VBS with the grandparents has been a hard and fast tradition since Wylie was in preschool. Both Sweet Man and I are preachers kids and so our kids generally get a double dose of VBS in the summers, which is a lot of fun for them and incredibly nostalgic for us. This year Wylie moved up to the youth group at VBS and it won’t be too long before he will  move from VBS camper to helper, which was my favorite season of VBS growing up. The VBS programs are generally in the evenings since
that is when people can get off of work and help out. This is good for me because it means that during the day we get to do all sorts of my favorite small town things while we are visiting. Yesterday it was the thrift stores, today it was the Farmers Market. 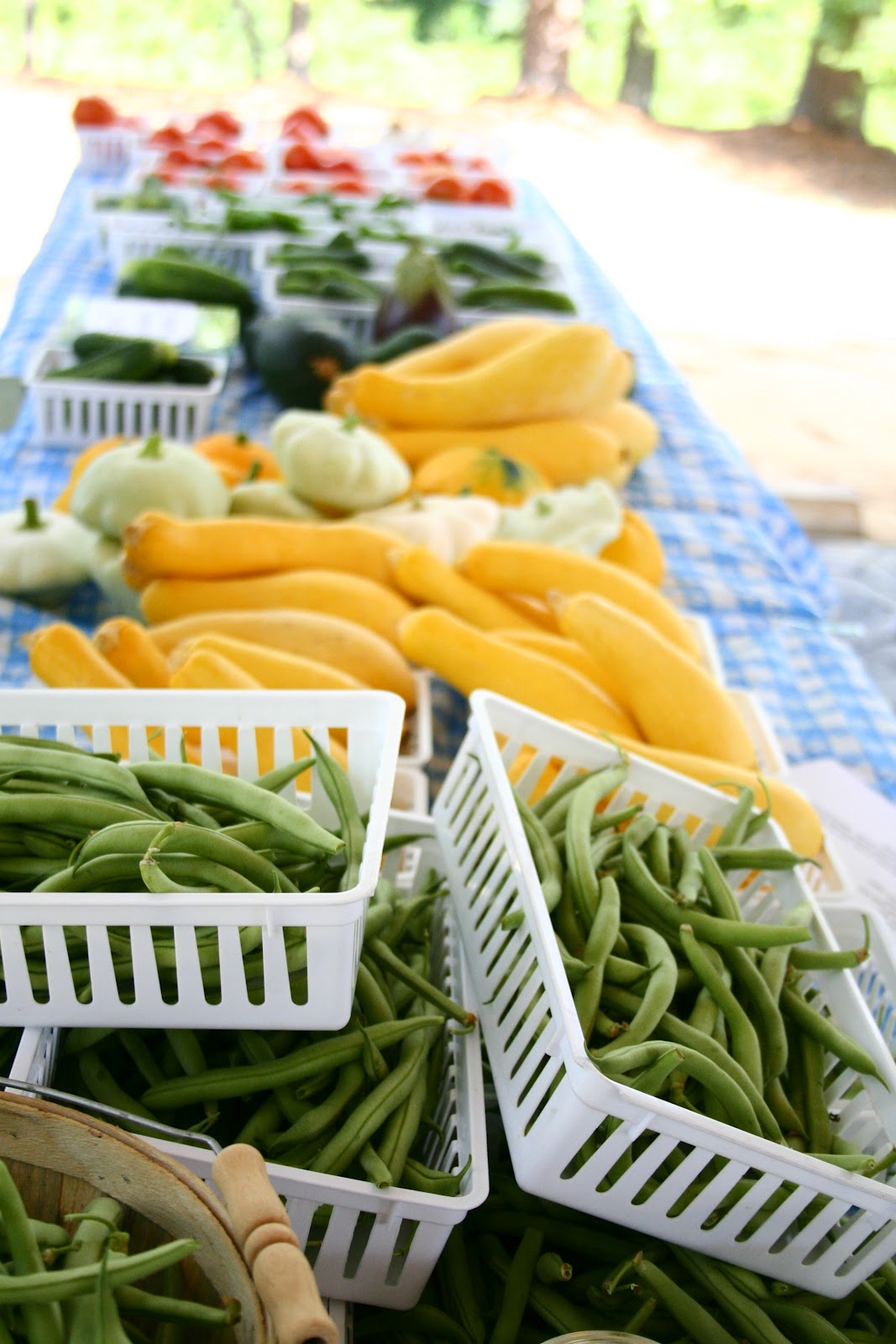 Arkadelphia is a small college town an hour south of where we live. It is the town where I went to college and where Sweet Man and I met. In fact he grew up not far from here in a community called Bismark. My parents live here now and in a crazy twist of fate they also both work at the college I attended (it is also my father and my grandfathers alma mater, so maybe it is not so crazy that they ended up back here…) This is not the town I grew up in as a kid, but it has become home in a way because of my college days and because my parents have now lived here longer than anywhere else in my lifetime. I love coming here every chance I get and living the small town life for a few days. 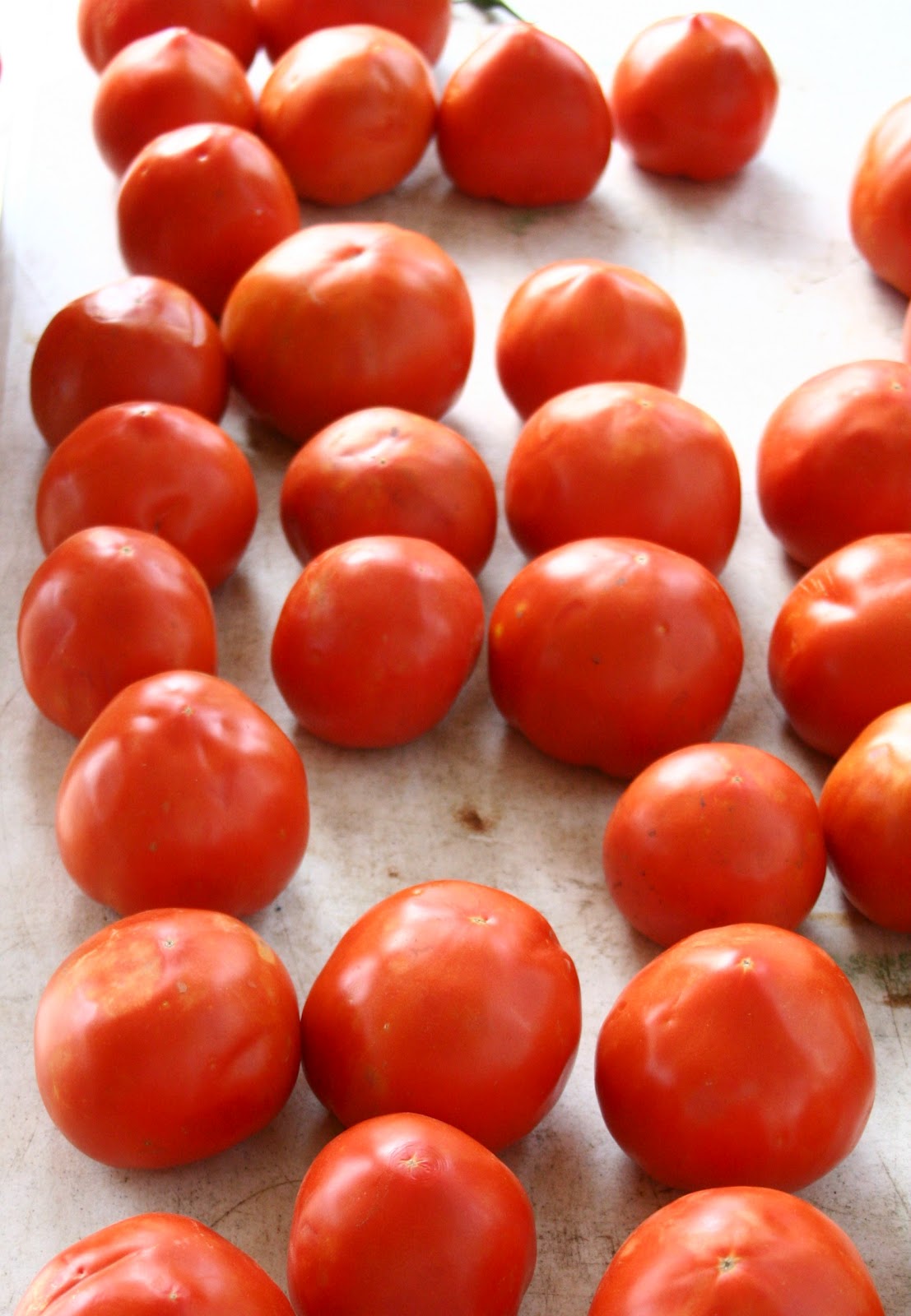 Today was one of those days. Today was the grand-opening of the new Arkadlephia Farmers Market. Previously the town or county had a market of sorts in the methodist church parking lot, but now the city has built a beautiful pavilion next to a city park, right between the two universities that anchor the town. The pavilion is a smaller, scaled down version of the larger Farmers Market Pavilion in Little Rock, which made me feel right at home. 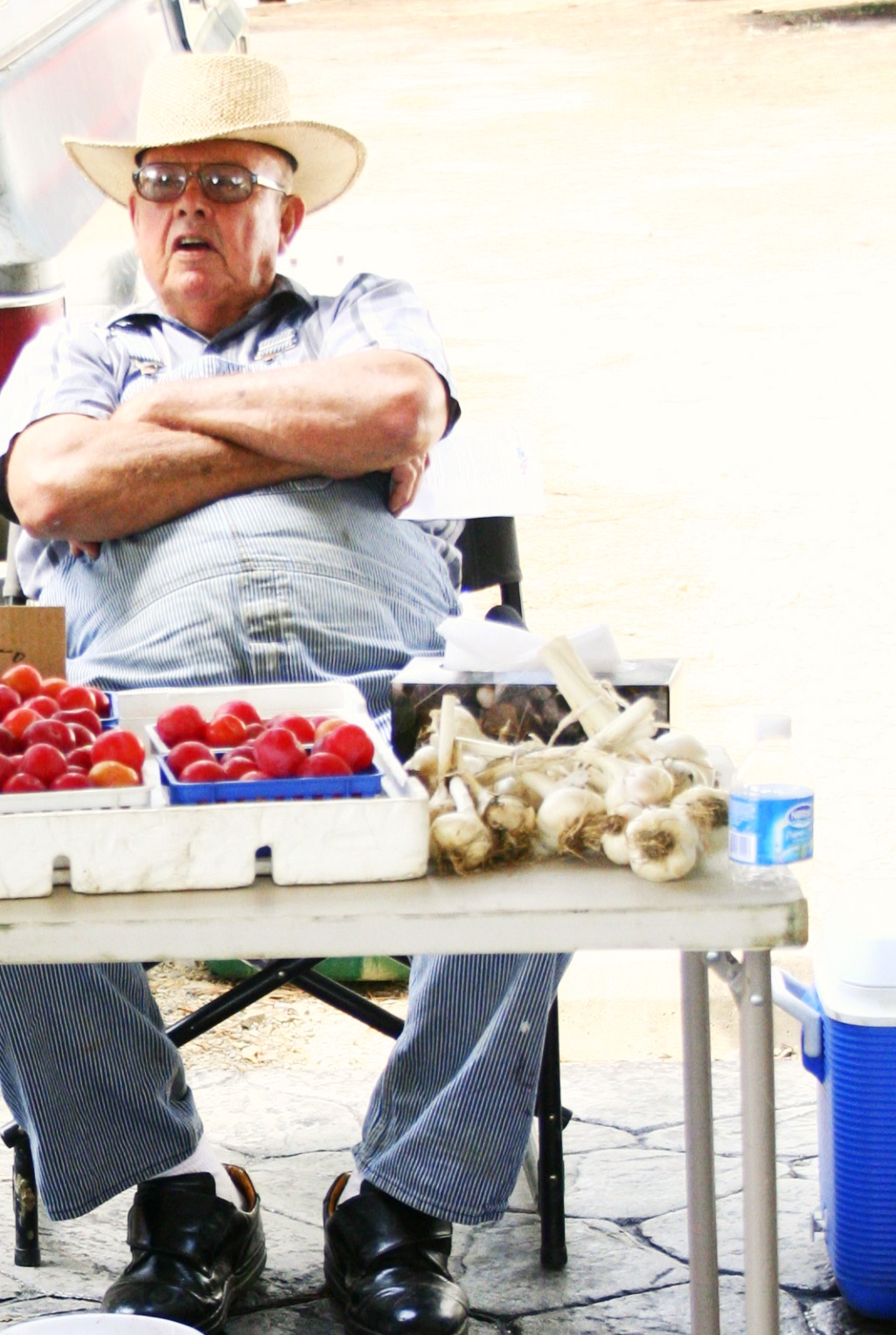 We got there after the ribbon cutting and all the hubbub so I was able to meander around and bug the farmers for pictures. Like this here fella. Farmer Hughes, who no surprise to me, knew who my father-in-law was as soon as I said I was a Greer. Farmer Hughes was dressed the part both in costume and in demeanor. I think the garlic felt right at home with this old salt of the earth. 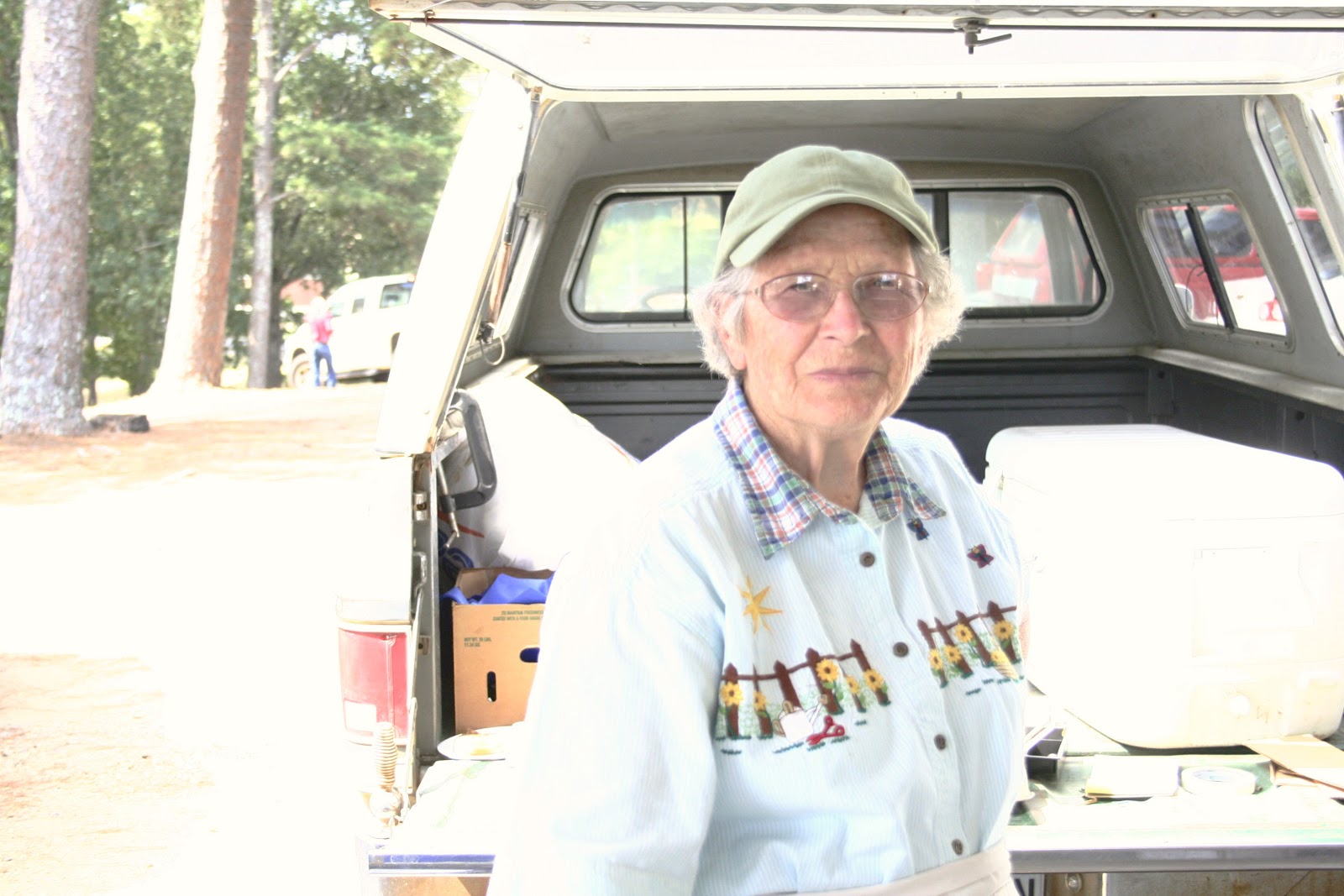 Mrs. Farmer Hughes had on her farmers market shirt and was hard at work selling their produce. She cracked me up complaining that the new pavilion was already too crowded. I can see that she is well matched to her counterpart. 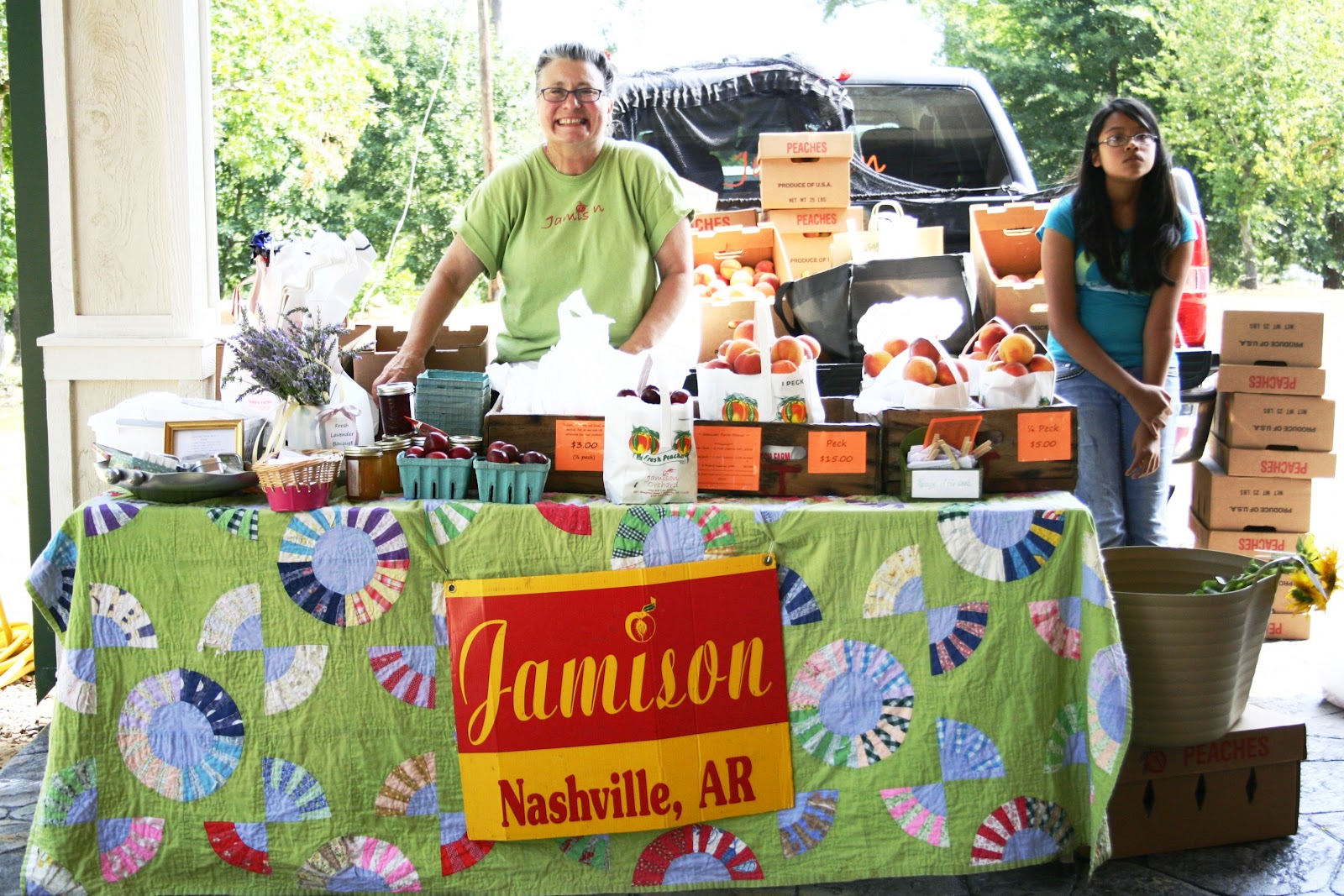 I loved this family. She said to me “I always want to present a beautiful table!” Now that is a farmer gal after my own heart.
I wanted to steal that quilt. Isn’t it beautiful?
Course you know my favorite part of this picture is the sullen teenager in the background, completely embarrassed and SO over this whole farmers market thing.
Oh honey, just you wait I wanted to tell her. Someday you will think things like this are cool.
Pinky promise. 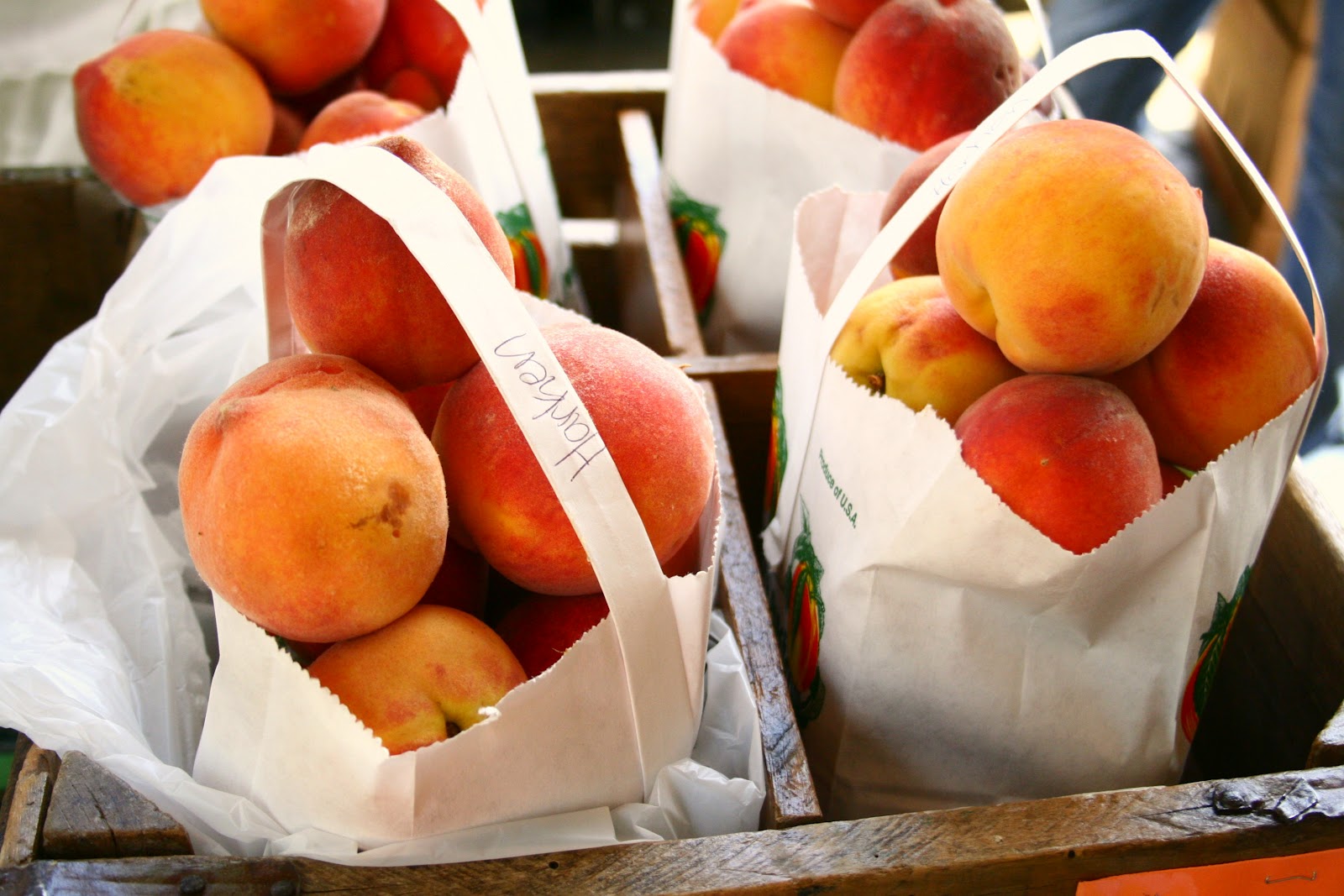 Wylie bought a peach from them and Miles bought me some Sunflowers with their lemonade stand money.
Sweet boys.
Meme bought them a whole bag of peaches which means sticky sweet kisses the rest of our visit. Darn. 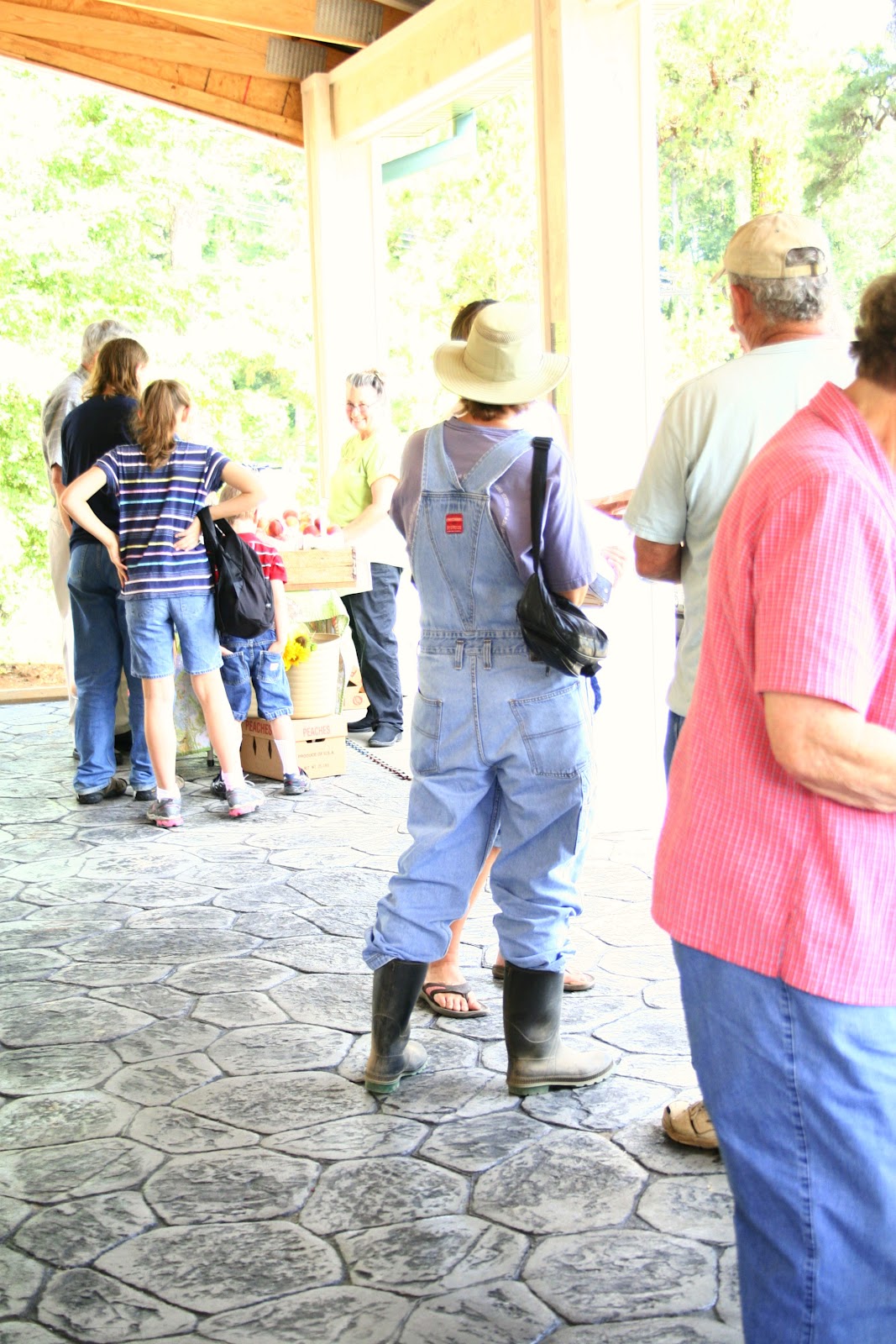 I loved the outfit on this gal.  And let me tell you, she was the real deal. This was no fashion statement for her, it was her. She had an armload of important looking papers and I had a feeling her pockets were crammed with soil samples.
She was serious about this farming stuff. 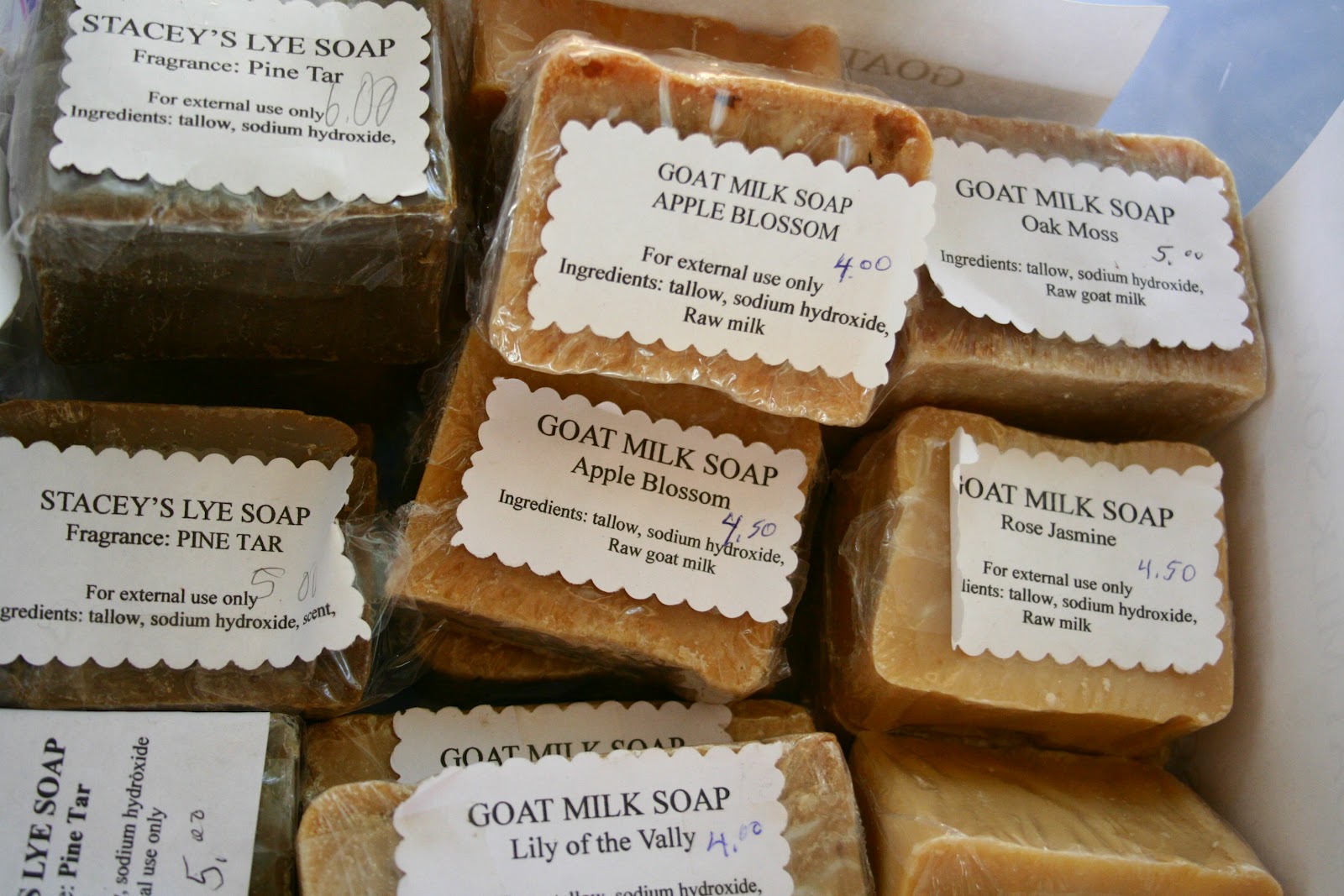 The J3 Farm from Nashville, Ar was selling soaps and jams as well as produce.
I love the Lye Soap label. Look at the fragrance on that one; Pine Tar.
Now that will bring sexy back. 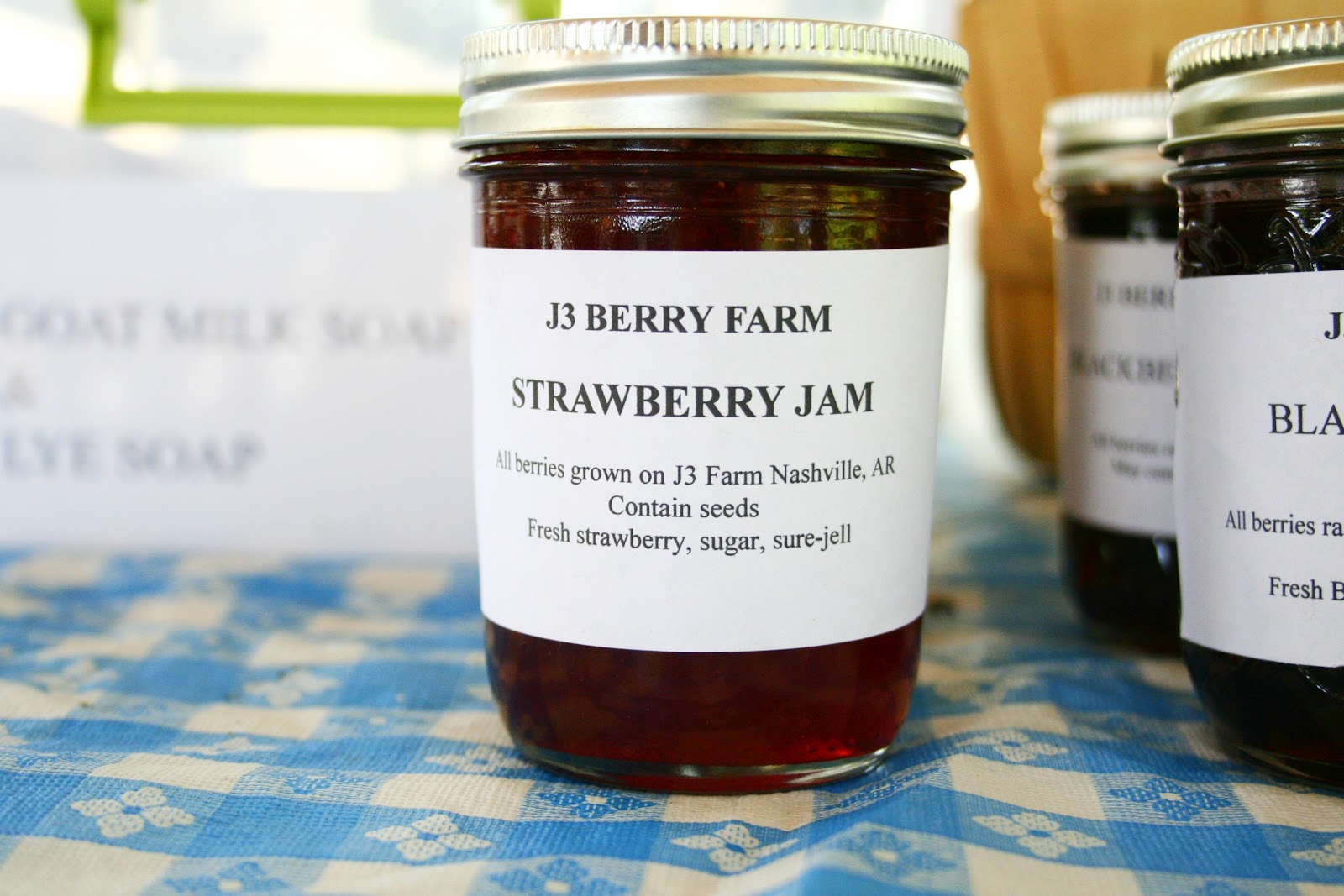 I bought some Blackberry Jelly to take on our vacation, as I figured it wouldn’t spoil between now and when we leave. I would have bought some produce but I am about to go spend 4 days at Middle School Youth Camp.
Please pray for me. 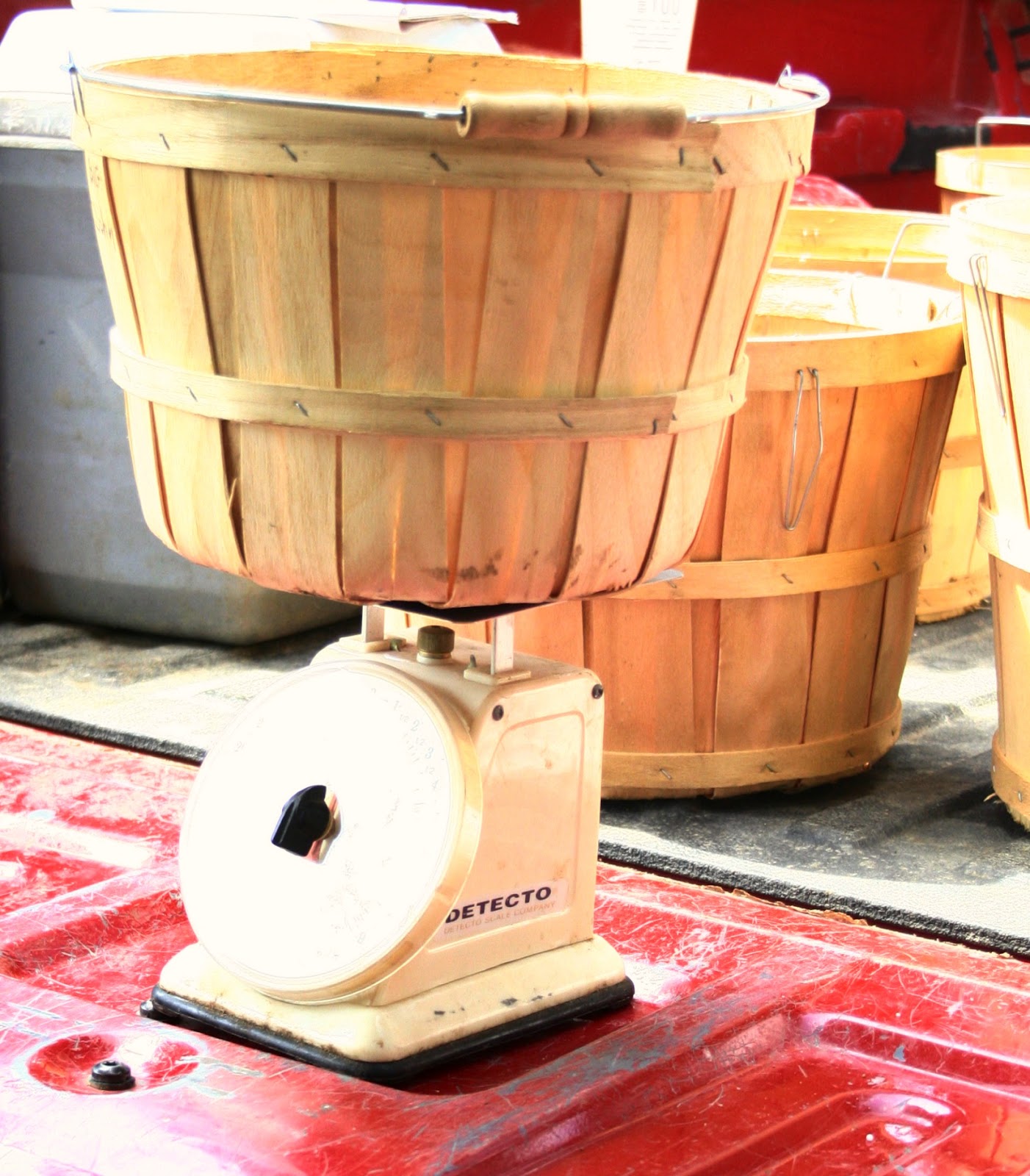 I will be copying this look as soon as I get home.
A bushel basket on a scale. So simple. So classic. 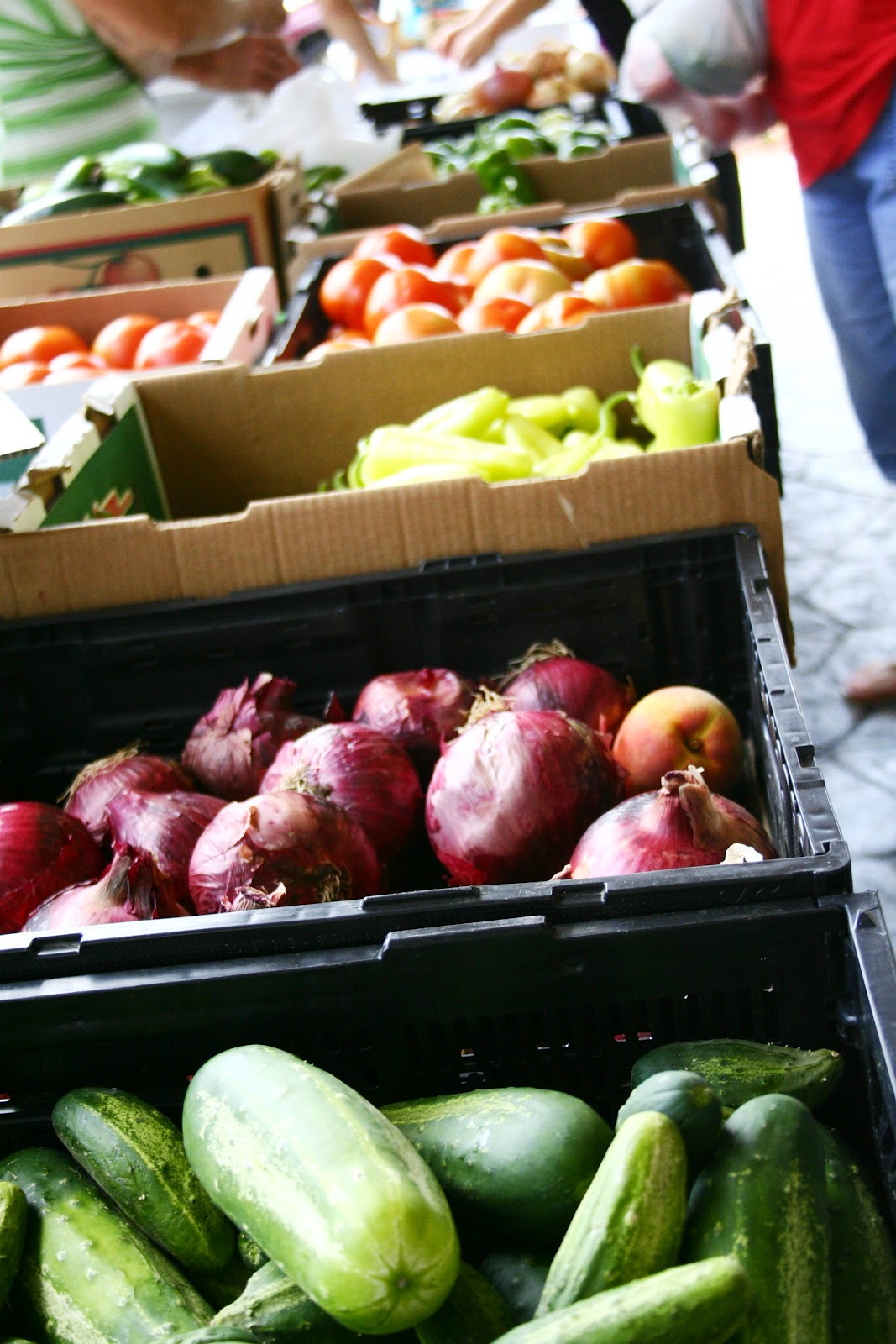 So there ya have it. A small glimpse at the farmers market Arkado style.
Now if only they would get their Facebook Page updated….