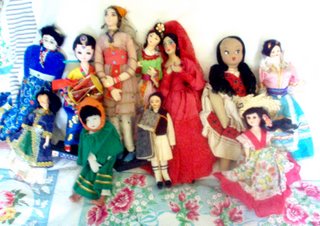 These are my dollies. I thought they were lost.

When I was a little girl, my grandparents did a lot of traveling – especially my mom’s parents and my dad’s dad. As a result, and due to the fact that I was only granddaughter for several years, I assembled a nice little collection of dolls from around the world. My Maw and Paw tended to travel to places like Mexico and Puerto Rico, while my Grandaddy made yearly treks to Israel and places like Greece and Spain. To be honest, I am not sure where the 2 Asian dolls came from… Maybe a Worlds Fair?

Anyway, a long time ago I left my home in Juneau and went to college, leaving my dollies behind (of course – not cool to take dollies to college you know.) Eventually my parents also moved from Alaska, following me back to Arkansas. They packed my doll’s and other childhood items up, along with everything else they owned – including containers of flour and oatmeal, and a ton of Current Jam (don’t ask.) The move to Arkansas was fraught with lots of… “bumps” shall we say? The end of a long story being that on March 1, 1997 my parents and siblings were living in Arkadelphia when a tornado plowed through and destroyed almost everything they owned and the small rent house they occupied. Because the house was small and their stay recent, most of our childhood belongings and household items were in the attic of that house, the result being that they were “tornadoed” that weird March morning.

After the tornado 2 things happened – First, People – friends and strangers came and cleaned up everything they could salvage from our house, washing it off and packing it up for us. Secondly, my parents rented a small apartment, furnished with donated items and put everything else in storage for the next 2 years.

They eventually built a great house, on the same property their rent house had been. Over the next few years – in between marrying off 2 daughters, getting another one through high school and into college, and watching her grandchildren grow, my mother begin the long process of unpacking all the boxes. Boxes from the move from AK, boxes from the tornado, box after box after box. The first Christmas that we had some of our original family ornaments on the tree I finally felt like I had come home – it was familiar.

Ever since that Christmas, there have been other visits home when mom will pull out a box and say “will you kids go through this and get what you want?” Last year it was baby clothes. This year it was my dollies. I can not tell you how happy I was to see them. I just assumed they had been lost and tornadoed like so many other memories. These faces that stared down at me from shelves and window seals all my life, are now back. They are tattered. Some are a little water damaged, some are losing their hair and need some repair. But I still love them all the same. They have been found and now they are back home, with me. They will sit in my office now and look over me and my work. Inspiring me with their color and their history and their familiarity… All things I find encouraging as I ring in this new year.