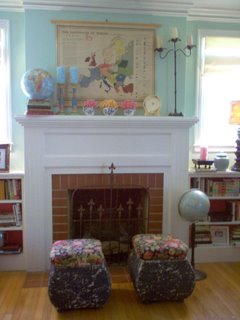 Before & After
These pictures are of our living room/mantle/bookcase area. The dark cave like picture is the BEFORE. The one that looks like an Easter Egg threw up is my AFTER.

This week is around the 3rd anniversary of when we found our current (and final if Nathan has his way) house. Which also means that it is around the 3rd Wedding Anniversary of Tracy and Adam (congrats my friends!) and it will be the 3rd anniversary soon for my other good friends Julie and Scott (congrats to you too!!) I am happy to report in this day and age that both couples are still married, and are doing married things like buying houses and having babies.
And we are still living in our new (I guess it’s not new anymore huh?) house, and doing house things – like planning for additions and re-arranging furniture.
The reason I remember all of this is not because of the dates – no that’s what normal people use to remember important occasions – I on the other hand remember because of the weather.

The weather today is just as it was the day I found this house. Overcast, slightly breezy, but not a cool due to all the lovely Arkansas humidity. The light in the sky cast a shadow that makes it seem as if a storm is going to roll through any moment, but it never does.
The weather was just this shade of weird the day I drove past this house, the day we looked inside, the day we got the keys…. It seems as if for 2 weeks everything stood at attention waiting for the storm.

So we sold our old 1950’s house, found a great house, built in 1939(?) on Skyline Drive in Park Hill (a fab old neighborhood, somewhat in our price range if we clipped coupons and gave up cable.) So we put in an offer and then hopped on a plane to Alaska, for Adam and Tracy’s Wedding Week of Fun. In the Seattle airport, about to board our plane for Juneau, we got a call from our agent. “The Skyline house fell through – seller doesn’t want to sell anymore. The End.” She said.
So there in Seattle airport I died. My heart sank, I went into shock. I was a million miles from home about to go on a great kid-free vacation with my sweetie, and when I was technically homeless. (NOTE: For a professional nester like me this is not the best way to get me to relax and have fun. )
But somehow, after only one serious sob-fest where I mourned our old house and my lack of control over our future for the next 8 days, I did relax (mostly) and it was fun – lots & lots of fun in fact.

But then we came home. And again I was a zombie. I even went to a memorial service for the father of a close relative and left my cell phone on. AND IT RANG. I was a walking talking shell of a gal.
We had a week to pack and move out. I was too busy to be emotional, but as we left our little Mid-century house I cried because I hadn’t time to cry.
We put our stuff in storage and moved in with my parents (who live an hour away) while we looked for a new house. One day, on a hopeless search, combing the streets of Park Hill I passed this house on Ridge Road – barely on the market a day. Pretty cute on the outside I thought. I called Pam, our agent – “I HAVE TO SEE THIS HOUSE NOW!”
It was a dump on the inside. But I could see the potential. It has almost everything on my list, and a great backyard (the only thing on Nathan’s List besides “Jerusalem Likes It”) The above picture is the only one that wouldn’t make you want to give back your lunch. The renter living here had left it in the most Animal House trashed condition. Garbage, open cat food tins, beer bottles, dirty clothes were everywhere. Windows had been left open, a stray cat was roaming around. It was awful. Disgusting. Depressing. “But I can work with good bones” I thought. “And he’ll clean it up” we thought. Nope. The day we took possesion it was even worse.
We called our agent. She called the seller’s agent. The seller lived in W Virginia and had no idea. We sent pictures, halted the closing, demanded it be cleaned up… I was convinced I was never going to get a house. I was going to live with my parents forever.
Somewhere in the middle of all that I left for Dallas to help with Julie’s wedding. I remember having to fax paper work to our agent from Dallas or somewhere. It was crazy – my head was spinning. But at that time I had only had one kid, so I still had some brain cells left to play with. The trip to Dallas was great, and hard and fraught with the stress of old friends in tight quarters and wedding details, but it was wonderful to be with those same old friends and it was especially wonderful to see Julie so happy.
Eventually I came home, the house got cleaned up, and we started painting, replacing flooring, & scrubbing every surface. The Amy’s saved our bacon on many occasions, as did Dan, Judea and Mom. Everyone pitched in to get it done. Nathan, Wylie and I slept on 3 mattress on the floor in Wylie’s room until we got all the walls painted and the floors done. Somewhere in there Wylie had a birthday & my little cousin Sam was born. Life kept moving on.
And then in November, when some of the dust had settled, and the parties had started, and all the boxes where not yet unpacked, we received news that another kid was coming. Turns out we bought the house just in time…

« Miles Simon Cash Greer is 2
Some Questions for the Universe »