The picture below was taken sometime in the spring of 1978. That is me on my Grandaddy’s knee. To the right, and my mother is holding my brother Joshua. My cousin Matthew (three days younger than me) is to the left, sitting next to my Nana and my Aunt Kathy. Standing behind the couch are the four Jackson brothers. My uncles Paul, Timothy and Brent, as well as my Daddy, Johnny Jr.
I love this picture because this is where my memories start in earnest. I am three, my brother has just been born, and life is great.
The house this picture was taken in is the house that I have known my whole life, and chances are it will be sold before the end of the year.
But that is another post.
In the early morning hours of Tuesday morning my Grandaddy passed on to the next leg of his journey.
There are so many things I will miss.
I will miss the way he loved my Nana, his love of Baskin Robins Ice Cream, the way he could recite the entire Christmas story from the Gospel of Luke by heart, his telling of a Billy Goats Gruff, and the way he always snuck the children in his life a little spending money no matter what. I will miss hearing him preach, and seeing him stretched out on his chair napping. I will miss the way he pushed his glasses back up his nose.
But most of all, I will miss his smile and I will miss his voice.
When your Grandaddy is a preacher, his voice becomes as much a part of your sense memory as a smell or a song.
Yesterday we laid my Grandaddy to rest in a small family gathering.
Below is his obituary as written by my Uncle Tim. 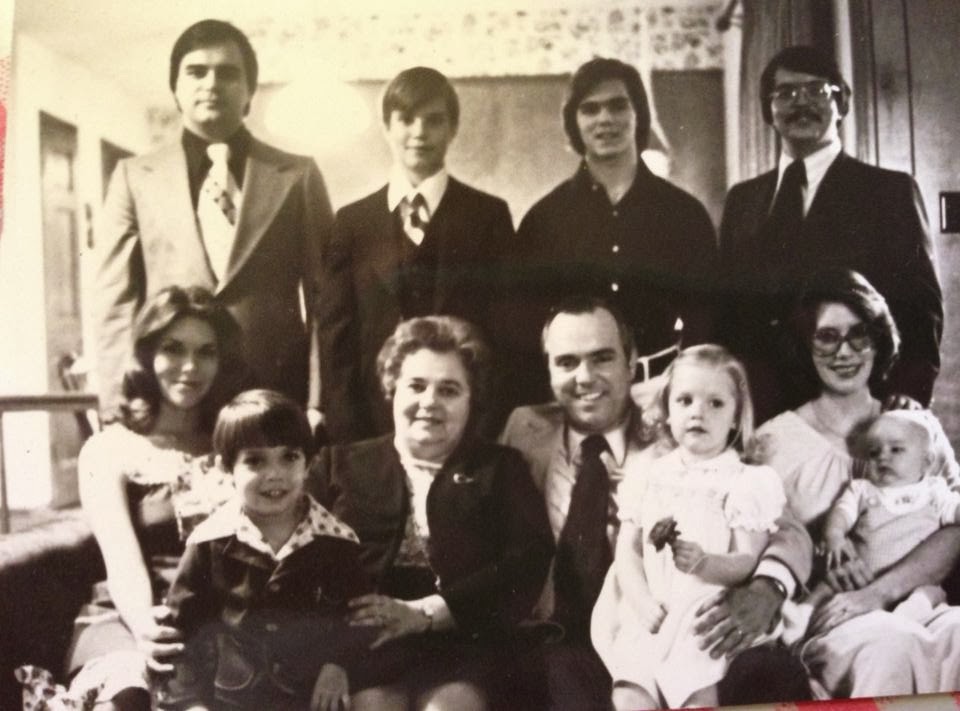 Obituary for Johnny Joe Jackson Sr.
Borrowing a line from D.L. Moody, Johnny Jackson Sr. used to say with a wry smile, “One day you’re going to read in the newspaper that I’ve died. Don’t you believe it!”  By this, “The Preacher”, as Jackson often referred to himself, expressed his absolute confidence that to be absent from the body is to be present with the Lord.
Johnny Jackson slipped quietly from this life to the next in the early hours of October 15 after a weeklong vigil in which he participated with great faith, humor and courage. He was 85. The boldness and resolve with which he made the end of life decision to discontinue dialysis reminded some of his trademark quip: “I might be wrong but I’m not confused.” Johnny spent most of the week leading up to his passing by encouraging family, friends, peers and protégés who visited his hospital room or talked with him by phone. His last conscious words were to Carlene, his wife of 64 years: “I love you, Sweetheart.”
He was Pat and Ruby Jackson’s second born child, arriving May 3, 1928. He must have looked like a “Johnny Joe” to Ruby because that’s the name she put on his birth certificate. He grew up in Camden, Arkansas, with his beloved parents and siblings: Pat Jr. (d.1956), Jimmy, Billy Ray (d. 1936), Homer (d. 2011) and Zada.
“Of all the adventures, privileges and honors I’ve had in my life,” Johnny often said, “what I cherish more than anything else is my family.” Johnny and Carlene have four sons: Johnny Jr., Paul, Brent and Timothy. The family grew and was enriched in love by four daughters-in-law, eleven grandchildren and six great grandchildren. “Granddaddy” loved each member of his family – praying for them by name every day and keeping up with the big and small events of their lives.
After his family, Jackson loved (mostly in this order) preaching and being a pastor; serving in the offices and institutions of the Southern Baptist Convention; playing golf; and cheering for the Arkansas Razorbacks, New York Yankees and Dallas Cowboys. Of this last item it should be noted that Johnny Jackson was a fierce competitor and loyal fan. During a forty-year stretch, he only missed attending two Razorback football home games. “One because of heart surgery and the other due to poor planning.”
During his studies and following graduation from Ouachita Baptist College (1951) and Southwestern Baptist Theological Seminary (1956), Johnny pastored churches in Arkansas and Texas. Most notably he was pastor of Forest Highlands Baptist Church in Little Rock, AR, from 1966 until 1986. He served two terms as President of the Arkansas Baptist Convention. He served eighteen years as a trustee for Ouachita Baptist University. He was elected Chairman of the SBC’s North American Mission Board in 1991. His passions for Bible study, history and travel came together in the 21 Holy Land tours he led for Dehoney Travel. In ministry, nothing exceeded his love of missions and his support for missionaries. The work and family of Morris Wanje in Kenya, East Africa, held a special place in Johnny’s heart.
After entering semi-retirement, Jackson served seventeen churches in Arkansas as interim pastor. During those interims, The Preacher faithfully practiced the less in vogue pastoral arts of visiting people in their homes and praying with people in hospitals and prisons. During his interim pastorate at First Baptist Church in Maumelle, AR, Johnny Jackson entered his 65thyear of public ministry. The congregation surprised “Bro. Johnny” with a public celebration of that remarkable milestone.
Johnny Jackson Sr. was buried in a private graveside service shortly after his passing. A public celebration of his life will be held at First Baptist Church, Maumelle, AR, on Friday, November 1 at 10AM. In lieu of flowers, donations can be made in his memory to OuachitaBaptist University.