This is a story about a couch. Our couch.
We bought our couch 11 years ago. It was (is)a Broyhill, a good solid brand, and we got it at a good price. I think. I honestly don’t remember the exact amount, but I remember being happy to have found it and thinking that it was a good deal.
What I really, really wanted was a red couch but they were hard to find in Central Arkansas in 1997, and if you did find one it had to be custom ordered and cost a pretty penny. So we went with the Clearance Brown version instead. The shape and overall style was exactly what I had been looking for and I loved the piping and it was comfy. What more could I want? 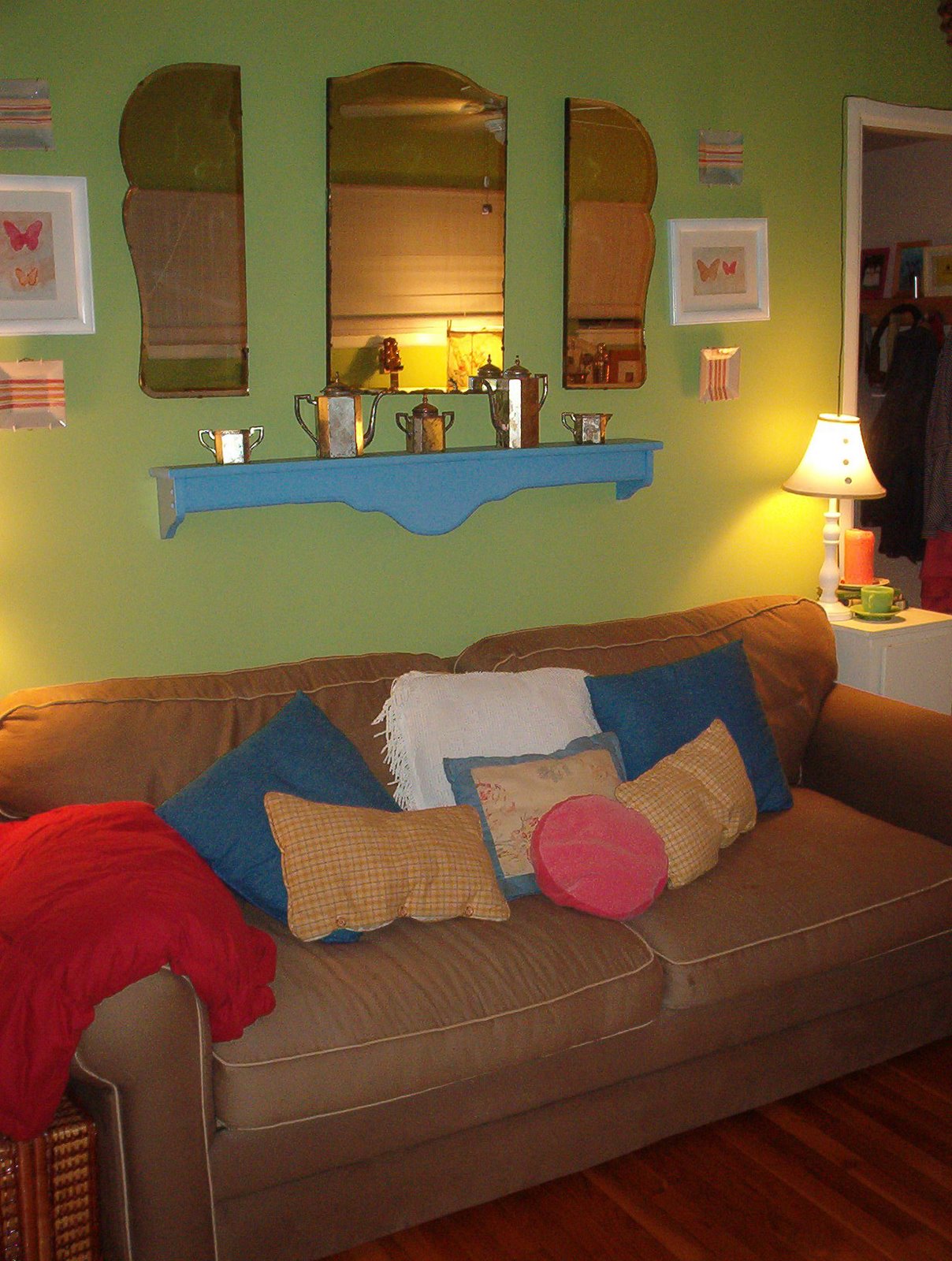 Phase 1: Brown Couch
This is our little brown couch in our itty bitty Broadmoor house… Oh I loved those green walls! 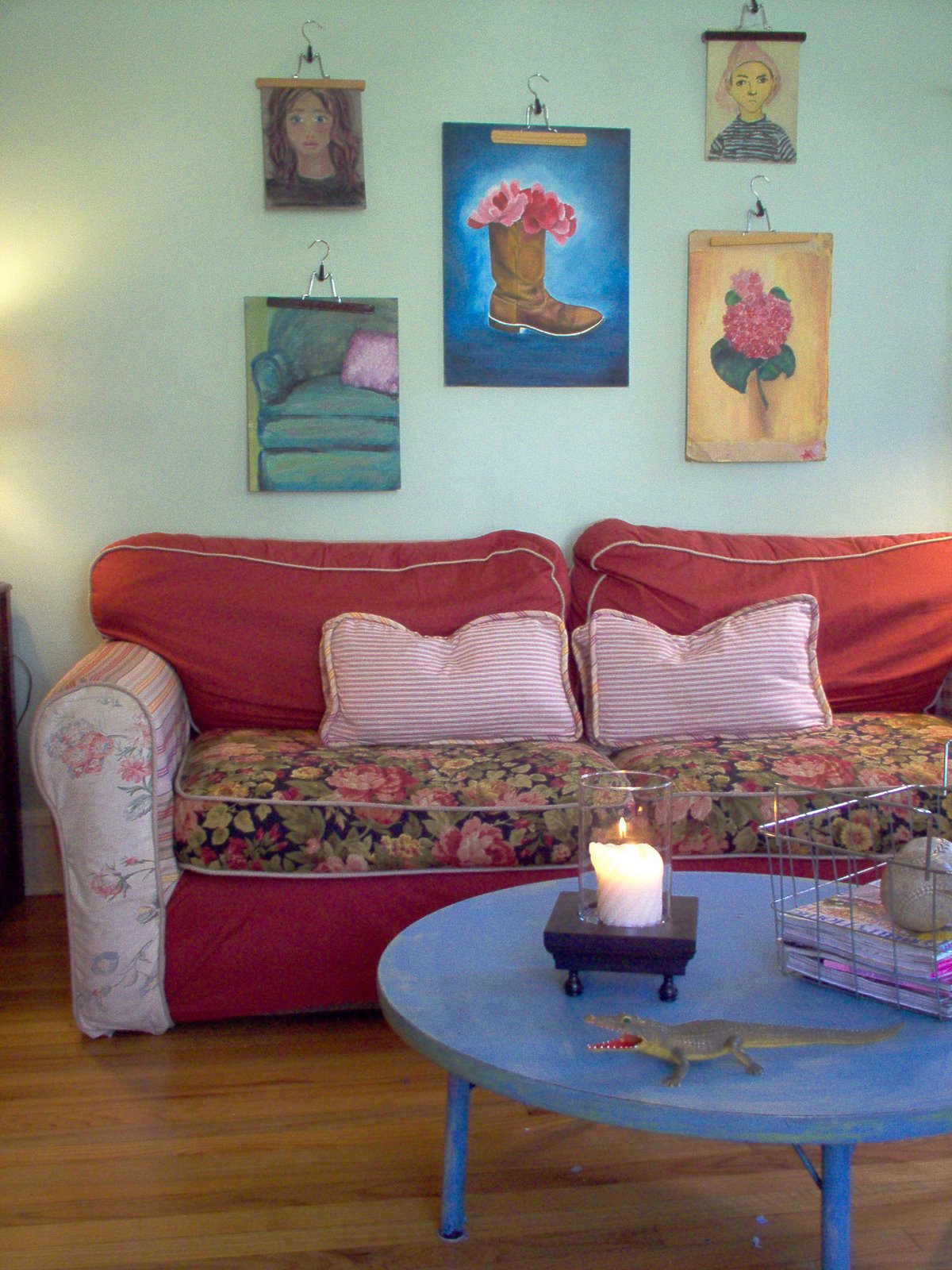 Phase 2: Patchwork Style
By the time we moved to this house a lot of living had been done on that brown couch. Lots of hippie brother sleep-overs and baby spit-up sessions and soy sauce explosions. The little couch that could needed a make-over. So my magical momma came to the rescue and recovered my couch in a “patchwork” style for me as a birthday gift.

We detached the previously attached back cushions so that I could flip them from the red side to the back side (which was a very similar brown to the original couch.) In theory this would have helped the poor cushions keep their shape better. But alas I loved the red too much and we rarely flipped them and they got all squished and misshapen and just turned blah. 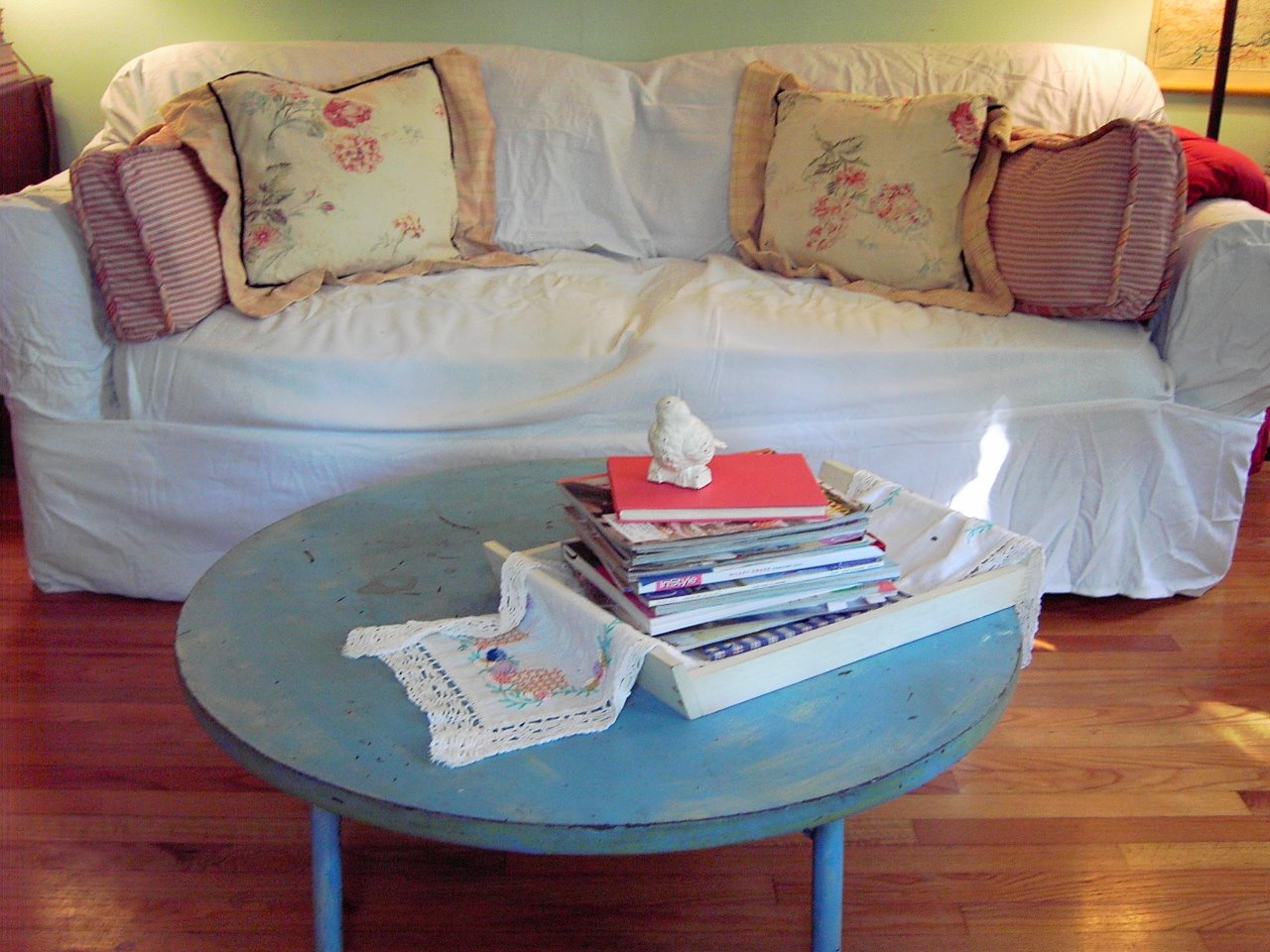 Phase 3: Whitewashed
2 Easters ago my sweet Maw gave me this great white fitted slipcover. She had found it on sale at Big Lots and snatched it up. I had been wanting a white – true white – slipcover for ages, but they are impossible to find. Lots of “linen” and “natural” and “ivory” out there, but not a lot of white. So when I saw this sitting on her dining room table last summer I squealed with delight and may Maw knew instantly then that she would have to give it up. Happily she did and my dream of having a white couch in the spring and summer months finally come true… But those pesky back cushions were still wearing out and getting squished further and further down… 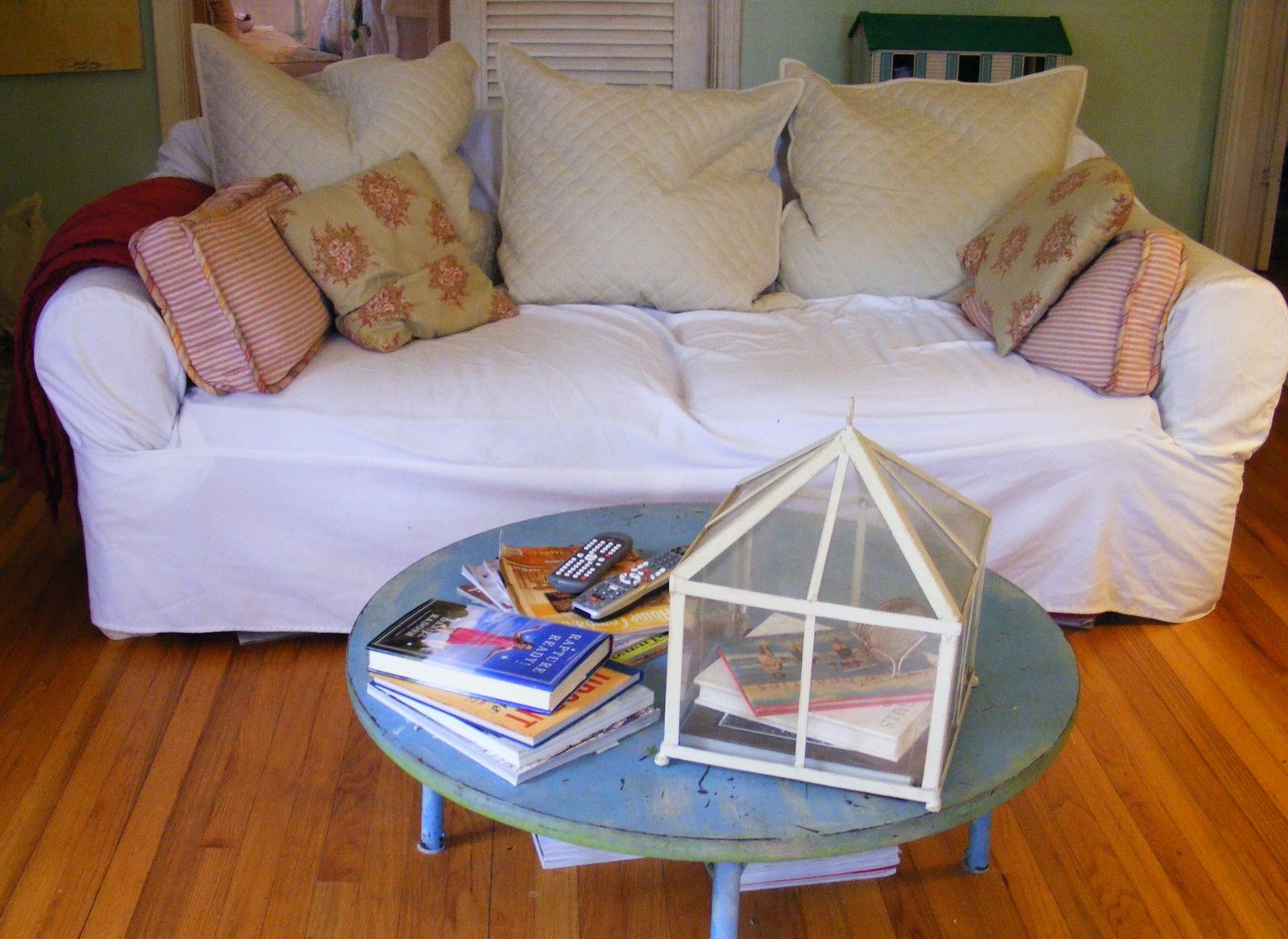 Phase 4: Three is a Magic Number
Enter the Euro Pillow treatment. At some point this past year – I think it was in the middle of a late night banner stringing session – I had the brain storm that if we took off the 2 long back cushions and replaced them with 3 Euro Pillows that they would be easier to fluff and clean and it would be a whole new look for not a lot of cash…

So for 6 months I have planned to design/make/ask my mother to make some back Euro Shams for me. But I could never decided on material or style and frankly I have just been to busy to worry about the pillows… That is until we went to Memphis and I had a good nights sleep and another brainstorm design moment. What if I simply bought some Euro Shams and insets instead of making them? What if I looked at the Pottery Barn Outlet (our fav Memphis shoppin‘ stop) and just took a gander what they had to offer? What could it hurt? I had a gift card on hand after all… 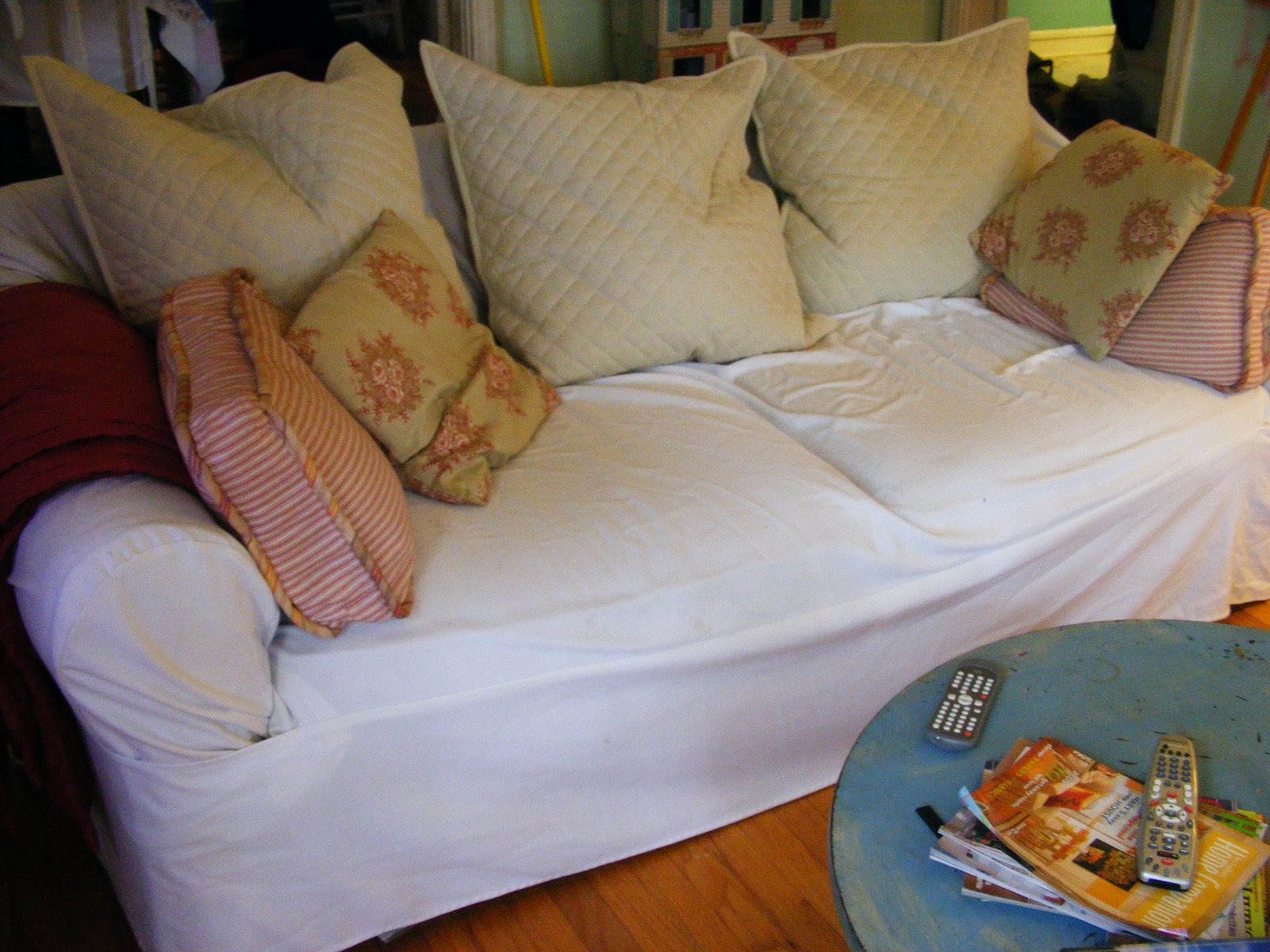 I could not believe my luck when I spotted these 26″ Quilted Brushed Twill Euro Shams from Williams Sonoma Home on sale for 5.99 each. I am pretty sure I did a happy dance right in the aisle. I am pretty sure that I got some weird looks, but who cares? $5.99 a piece – I couldn’t believe my eyes.
They had white shams but I decided to be a tad more practical than I am usually inclined to be about such things and got the light khaki color instead, thinking that I could use the khaki color with both the white slipcover in the summer & the red patchwork look in the winter. 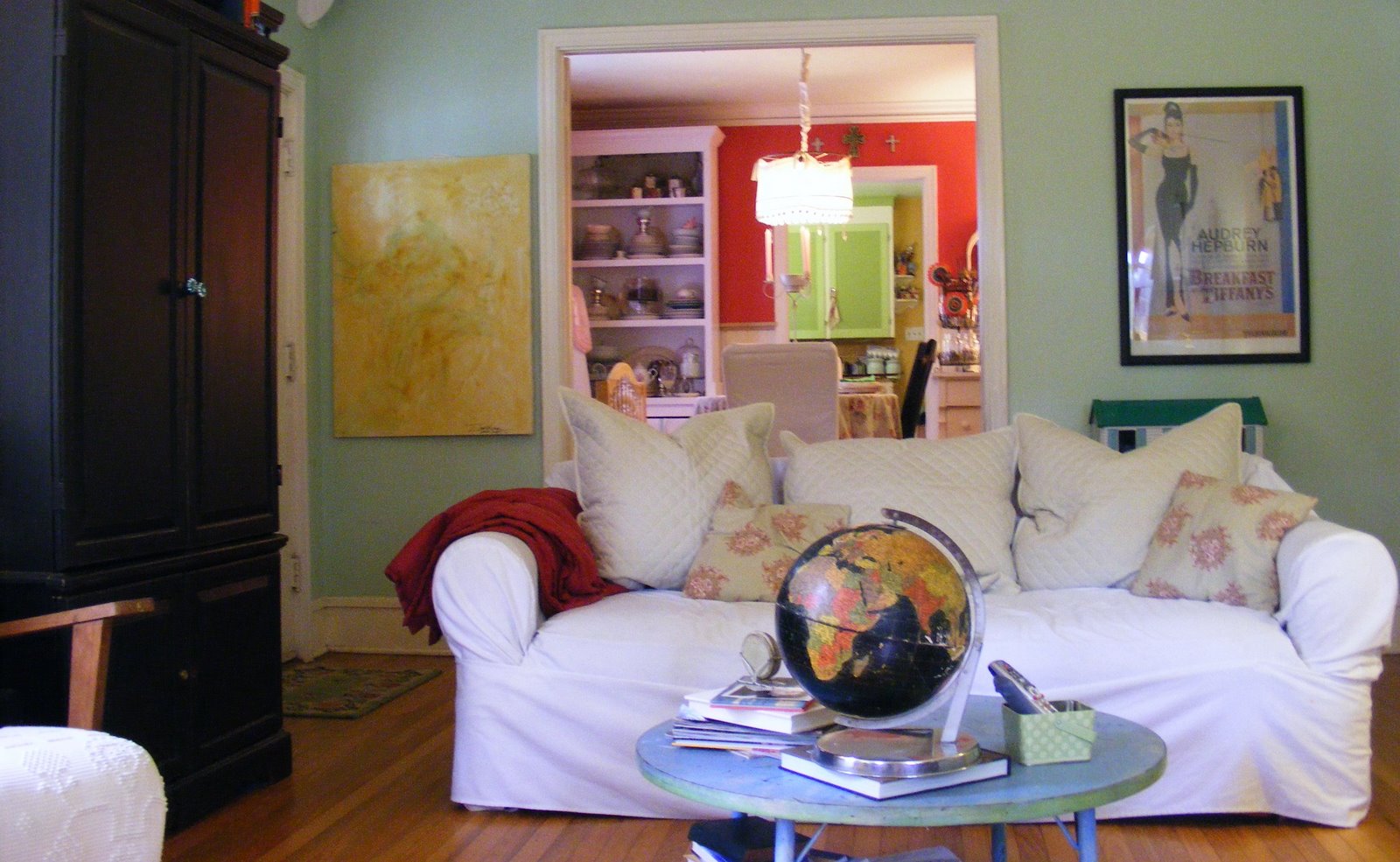 So hear is my couch, newly dressed with the 3 square euros, ready to finish out the summer in style… 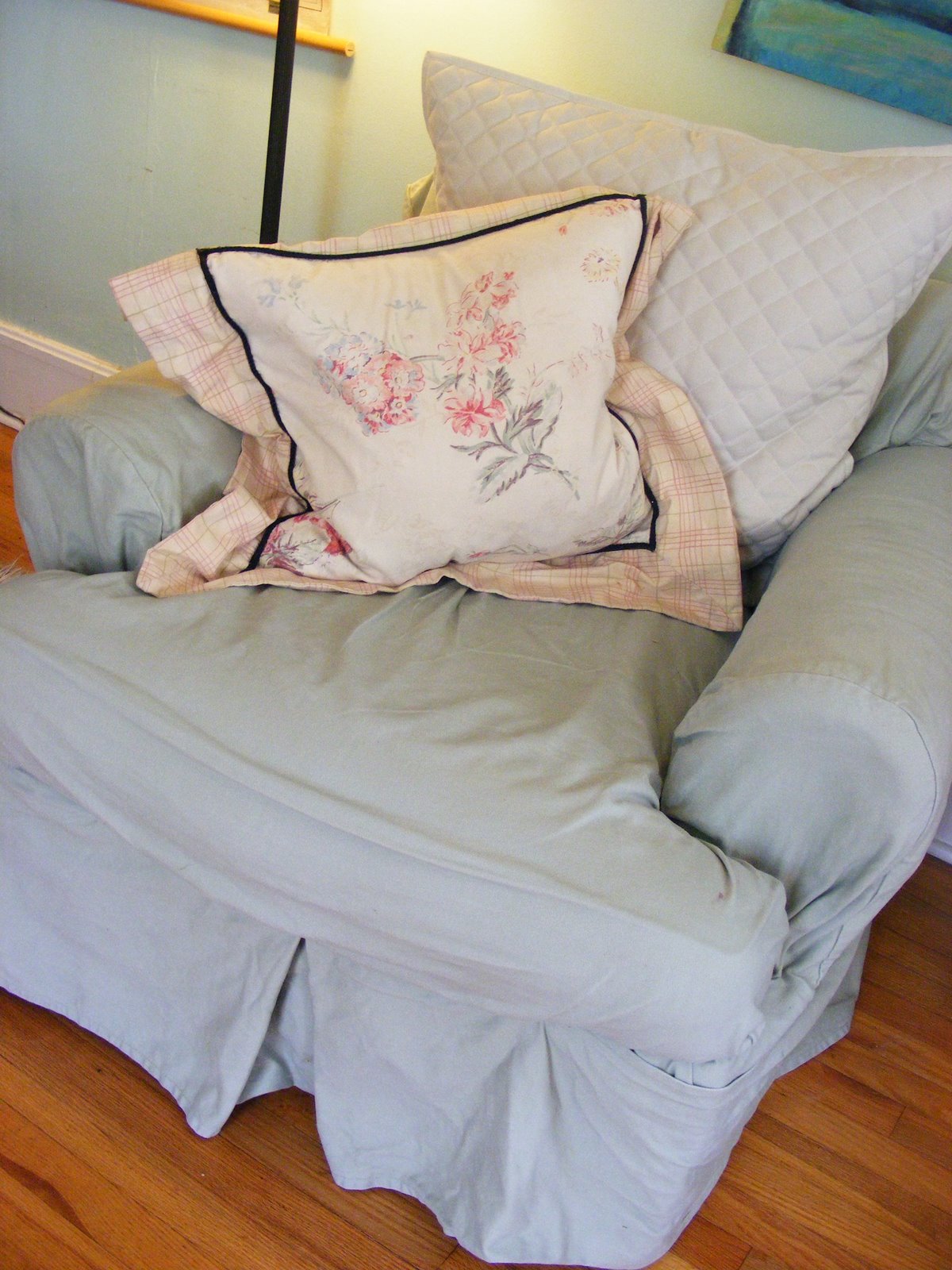 Oh and here is the chair I got for 6.99 at a thrift shop and covered with a sage green, Ebay purchased slipcover. I also used another one of my new found Euro’s as the back cushion on the chair, just like on the couch…I thought this would help pull the 2 pieces together and add more originality to the chair. 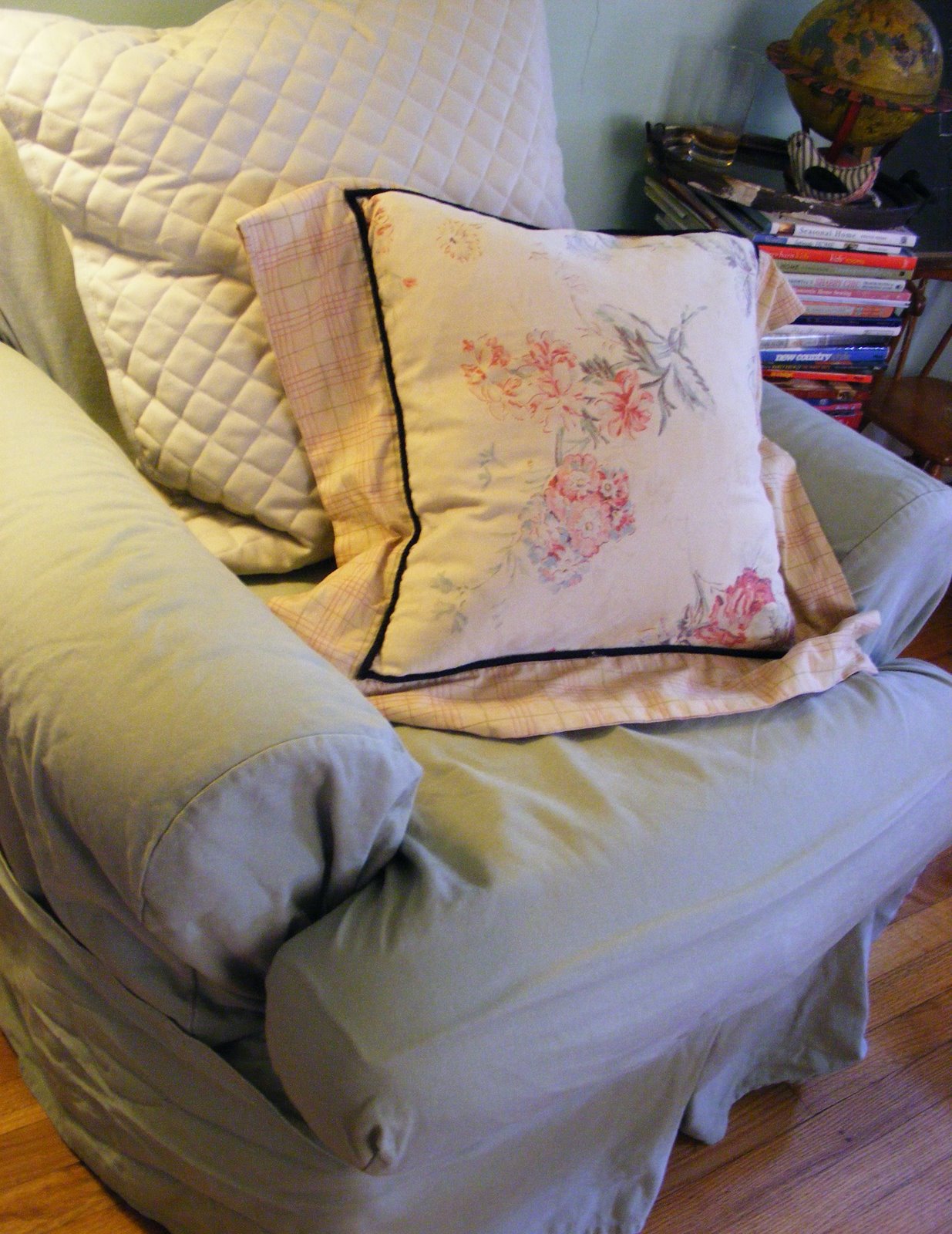 This is a 2 piece slipcover so the seat has it’s own cover, which I love. 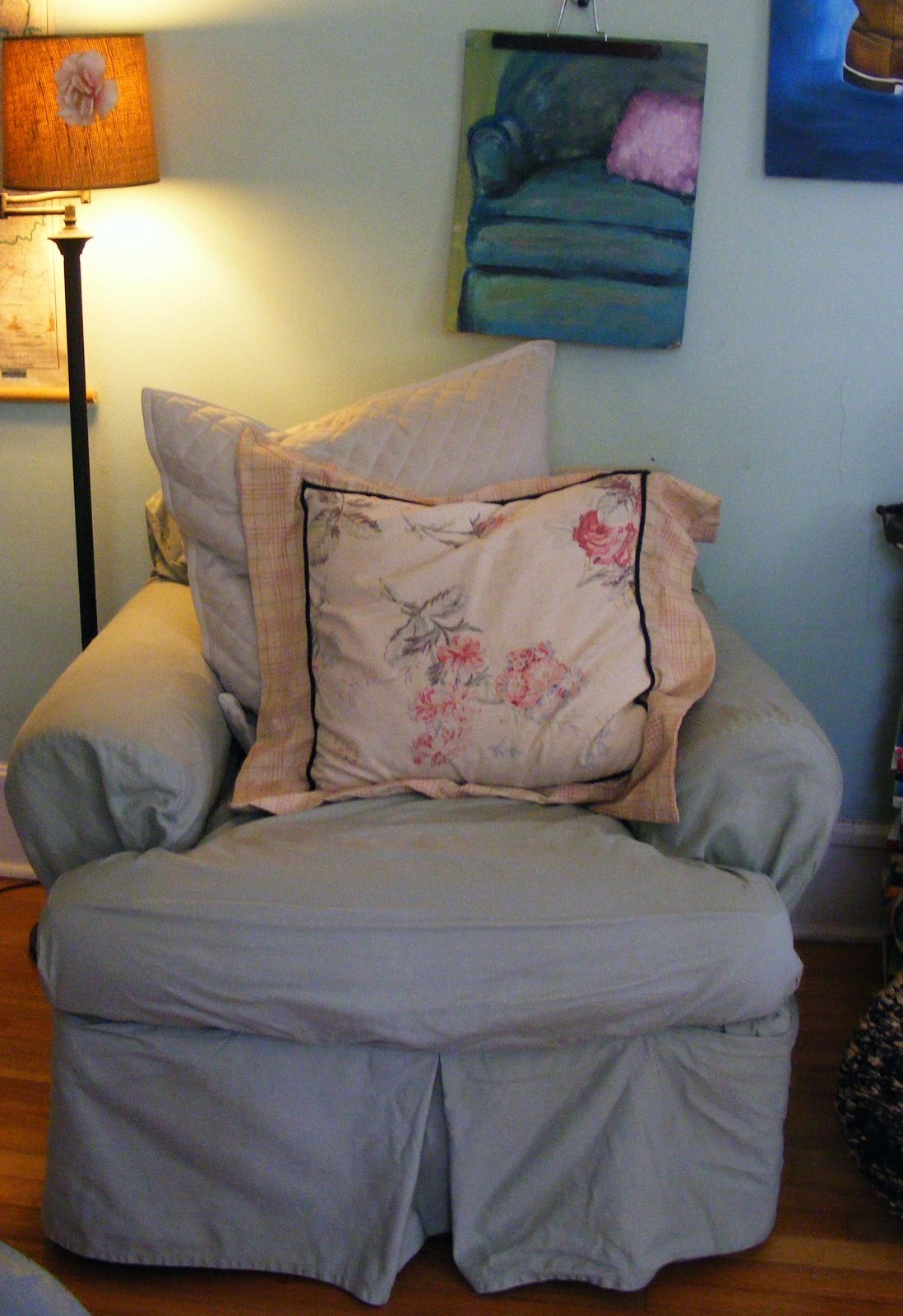 I adore slipcovers and believe you just can’t take no for an answer when working with them. It is the only way to win. Also I adore the cotton look, and I like the slightly rumpled look, so none of that bothers me… It’s like little girls in sundresse’s to me. A little wrinkle adds to the charm… I have a wingback chair that better watch out. I have my eye on a slipcover for it as I type…

So there you have it. The life of my couch and an introduction to my new comfy chair. If you want to come test them out feel free – I would love to share a cup of coffee and chat for a while!