If you weren’t doing what you are doing, what would you be doing instead? I’ll answer first. I think I would be in show business. But not in front of the camera, instead behind it, fluffing the pillows, tracking down the perfect period sofa or scouring thrift stores for retro fixtures… I think dressing the sets of make-believe worlds would be so much fun. The ultimate doll house experience. So to that end, whenever I watch movies I tend to keep one eye on the set, and one eye on the acting. And I love it when I am pleasantly surprised and inspired all at once! That happened this week when Maw and I rented The Queen… 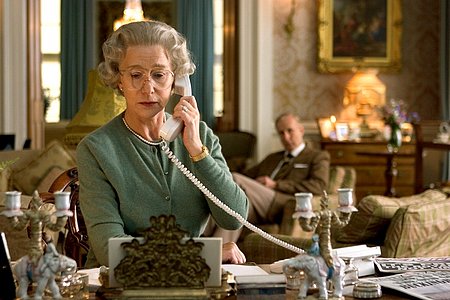 Have you seen The Queen ? Well if you haven’t you should. Go out right now and rent it… Well, read this first, then go out and rent it, buy it, download it, whatever-it. The Queen is a great movie with lots of layers and fab acting. Also, it has great sets. Well, the sets of Balmoral are great. And the Blair’s house is cool too because it looks so lived in, full of kids and stuff and people tripping over each other in little rooms, which is so much more real than the tidy Nancy Myers sets that we all love, but could never achieve, or at the least maintain….

But back to the castle… Here is a little bit of trivia for you (see this is where my geeky History Major side kicks in…) Balmoral Castle is not a state owned dwelling. Instead it is a private residence owned by the Queen herself. It has been passed down from Queen Victoria, who bought the land and built the castle as a refuge from all the pomp and stuff at Buckingham Palace. Which is funny, really, building a castle to get away from your palace. But I guess we would all have a little get-away home if we could and who is to say a castle in Scotland wouldn’t be just the thing? But I digress. 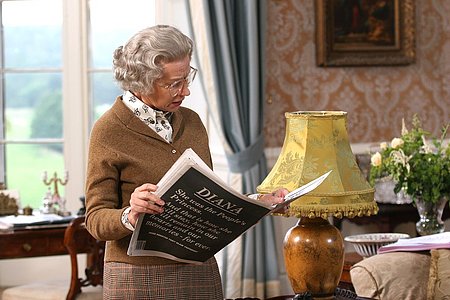 The thing that makes the sets of Balmoral so interesting are that they are a lot more informal than those of the bigger palaces. It is much more English Country Charming than Over The Top Gilding. Because the house is a private residence there haven’t been any public photo’s taken since the 1980’s. On the official web site there are renderings from the 1800’s and then comparable photo’s from the 1980’s but that is it. No current photo’s, no virtual tour. So the whole set for the movie was taken from what little info there is and probably some personal accounts, which I find fascinating. For instance, the wallpaper in this scene is taken from the pictures in the archives. Also, there is a mirror in the Dressing Room rendering from 1863 that they use in the actual movie. Wouldn’t you love to have been the person to hunt that mirror down in prop warehouses or flea markets?

This is the stuff I love from movies. I love good sets, I love historical sets. I love to see how they use color and light and texture to convey the mood of the movie. How integral the set and the look is to the whole story, whether it flows with the narrative or against the narrative. Oh, to be a set designer, props mistress, art director or set decorator…. what fun!

OK, so now that you know what I would be doing, what would you be doing??